This will be another short one.  I slept until my alarm this morning and then spent more time than intended reading the news.  Things are slowly grinding to a halt.  I went to the store for supplies yesterday and the shelves are becoming bare at the grocery.  No yeast there or at many stores so my bright idea of making bread from scratch may end up a bust.  Or just find a different kind of bread to make.  I posted on Facebook that I would make bread for people if they bought the supplies.  I would even deliver it if it was within a reasonable driving distance.

A nice thing that has come about (even though it will shut down the repo yard eventually) from all this in that many banks and such are waiving missed payments due to the outbreak.  I am not sure for how long (I got an email from my bank this morning but I’ve not read it) or what the details will be.  But I appreciate that the almighty dollar is not going to be in control with some of these bills.  Atleast not yet.

I watched two hockey documentaries last night.  One  was on Bob Probert and the other was on Grant Fuhr.  I met Probert when I was in high school (he has to come and sign autographs as part of his probation terms).  And I LOVE goalies and Fuhr has always been a favorite for me.  Watching those docs I remembered how awesome hockey was for me growing up (I even dated a hockey player for a while… sigh) and how hard it was for those guys coming up from the minors with all that talent and being exposed to all the attention and glam of the big leagues.  Amazing stories form most of them!

Nuts.  I need to shut up and get gone!  Thanks for reading!  I hope you have a great day!

The temperature has dropped and we are supposed to get snow.  Everything is covered by a heavy frost.  Bah humbug.  I need to go make my car payment.  I will probably take Moose and Stella.  Essie usually doesn’t want to go but I always ask.  If she shows interest then I get her in the car.  If she wants to stay home I let her.  Today feels very blah.

I got a whole update to my library here at home.  Someone left around 100 or so books in their vehicle and never came to get them.  So guess who brought most of them home?  There were four I thought Mom would like (I sent photos of both the front and back so she could read the blurbs and she wants all of them) and seven for Chris (I also sent a phot to him and he was excited about my choices).  A bunch are going to the library (a lot of kids books and non fiction that no one has an interest in or duplicates of what we have).  I amazed myself by being able to find homes on shelves for all my new books.  I haven’t piled a single one on the floor for storage.  Chris was suitably amazed.

That was my bright moment for the day.  With all the worries about the virus three races have been cancelled between MotoGP and F1.  So now Circuit of the Americas in Austin, Texas will be the season opener waaaaay off in April.  And that is assuming that there are no travel bans between now and then.  Texas was supposed to be the third race of the MotoGP season.  F1 has cancelled their China race.  I wonder how many more races will get cancelled.  (Yes I do understand that this disease is affecting much more than racing.)

I saw a cartoon yesterday that talked about limiting interaction with other people and staying home.  It then had a cartoon of an introvert who said, “I’ve been preparing for this my whole life!”  That is how I feel.  I do need to get out more but I am ok with limited contact with people.  Chris and the dogs (and you folks) and I’m good!

I keep glancing outside.  It looks cold and I don’t want to go.  But I do need to go make my car payment.  Sigh.  Maybe I can stop at McDonald’s and get cheeseburgers for the kids.  It gets us out of the house.  Sadly on a day when I’d rather just stay home!  I guess I had better get to it.  Sooner gone sooner back home.  Thanks for reading!  Have a great day!

Well I have to say that yesterday was the best day I had in a long time.  The dogs were awesome (minus the little incident between Moose and Essie).  I got everyone’s nails trimmed and they were all very good while we were gone.  I also did some coloring while I was waiting for Chris to get up.

Chris and I had a grand time out and about for a few hours.  I put on my U of M shirt before we headed out the door.  We ended up downtown Traverse just wandering.  I had a hankering for a big messy burger so we ended up at Mackinaw  Brew Pub.  The goal was to find a restaurant that did not have a tv.  I tend to get very vocal when watching a sports game I care about.  It had been a while since we had been to the pub.  The last time we were there they did not have tvs.  Weeellllll they had gotten some.  So when we walked in I was immediately scoped out to see which team I was rooting for.  I passed muster.  I got a nod from each of the patrons at the bar and they turned back to the game.  We got seated in the far back where it was quiet.  (Yes there was a tv and yes I was facing it.)

When I saw the score I was not happy.  We were losing.  But as we chatted and I watched the game unfold we scored and pulled ahead.  I yelled and did numerous fist pumps with Chris openly laughing at me.  I also pulled out my phone and played the U of M fight song.  The meal went swimmingly.  Chris offered to stay for the second half of the game but I said no.  We stayed long enough to watch them score again (again more yelling from myself (the other end of the pub/restaurant was vocal as well) and I suggested that we get while the getting was good.

We checked the parking meter and we still had 25 minutes so off we went for more adventure. In and out of shops ooooing and aaahhhhing as we went. We found a fabulous candy store (just like those old school penny candy store of yesteryear). Hundreds of sodas and such lined the walls. Tons of different candies to chose from. Awesome tin signs to read along the walls. Fun little toys and do dads to get. We left with a six pack of sofa. My favorite is a rather huge bottle called Pirate Fizz Soda. It is Blackbeard Coconut Lime. It is soooooo good! Chris picked out an Agave based soda (sorry it’s all pop to me) and his fave sassparilla.

After that we headed to get groceries. Once we got going I’d check the score on the game and cackle gleefully (we were leaving them in the dust) and Chris would chuckle. I am always entertaining when I am having fun. Close to the end of the trip I checked the score one more time and a fellow Wolverine (this is our team mascot) said that it had been 34 to 10 in our favor the last time he looked. As I checked the final score I let out a happy yell and proceeded to ding our fight song. I informed everyone that we won 44 to 10.

We checked out and headed home. I had asked if Chris would get the kids some soup bones since they had been so good. He did. So when we got the groceries in I passed out bones and they were occupied for the next 2 hours. I rounded out the evening drinking one of my U of M beers that Chris got me and chatting with Mom. All in all a fabulous day. ❤️

I hope yours was just as awesome! Here’s to having another one today! Cheers! 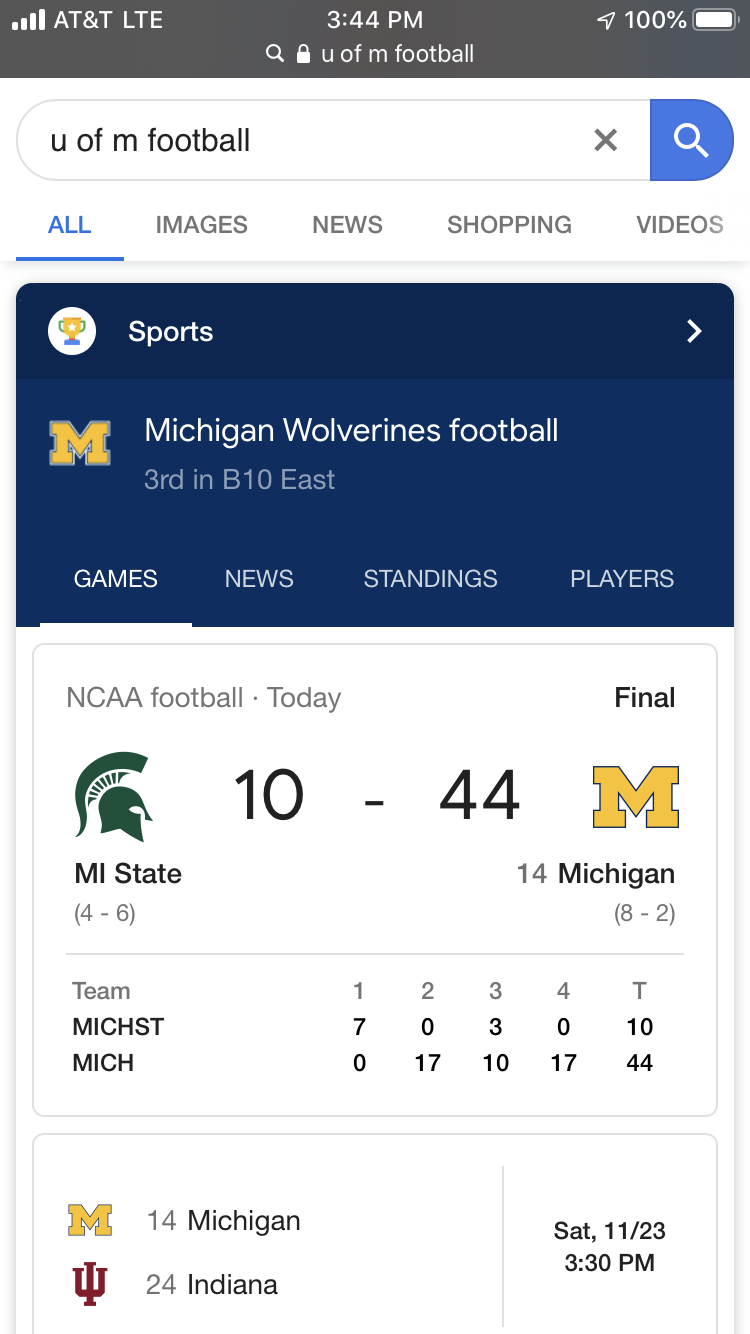 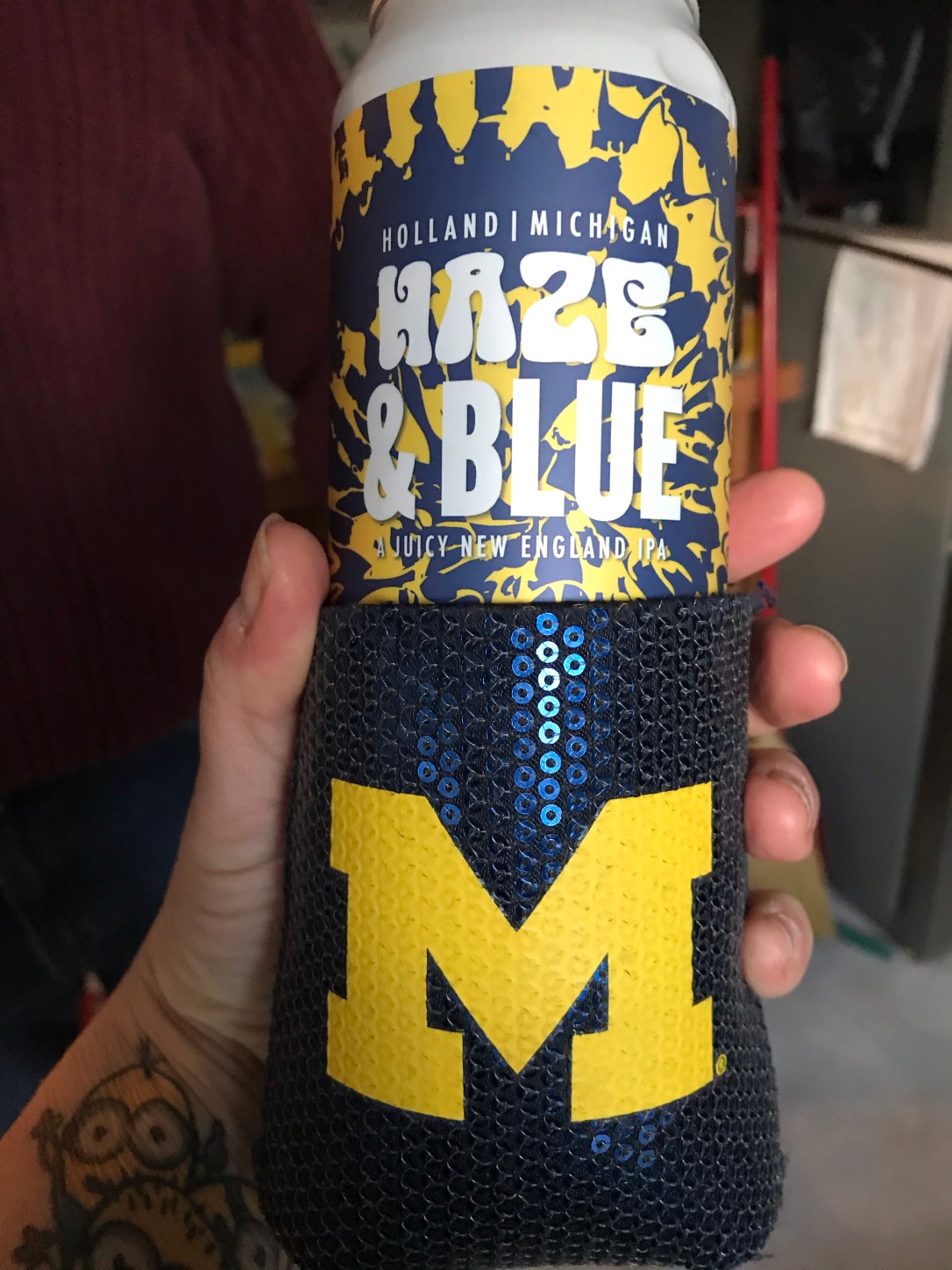 Well today is a big day here in Michigan.  It is the game of the season for a lot of us. University of Michigan versus Michigan State. (This is American football.) I am a diehard U of M fan. I spent a lot of my childhood in Ann Arbor (where the U of M campus is) and many of my closest family and friends have graduated from there. And since Mom is a die hard fan it kinda comes naturally. I have many good friends and family that are just as crazy about that “other team” but I try not to hold it against them. Too much.

My awesome husband (who really could care less) sang the Michigan Fight Song with me last night. I was so proud that he learned it! They even brewed some special beers for us fans… 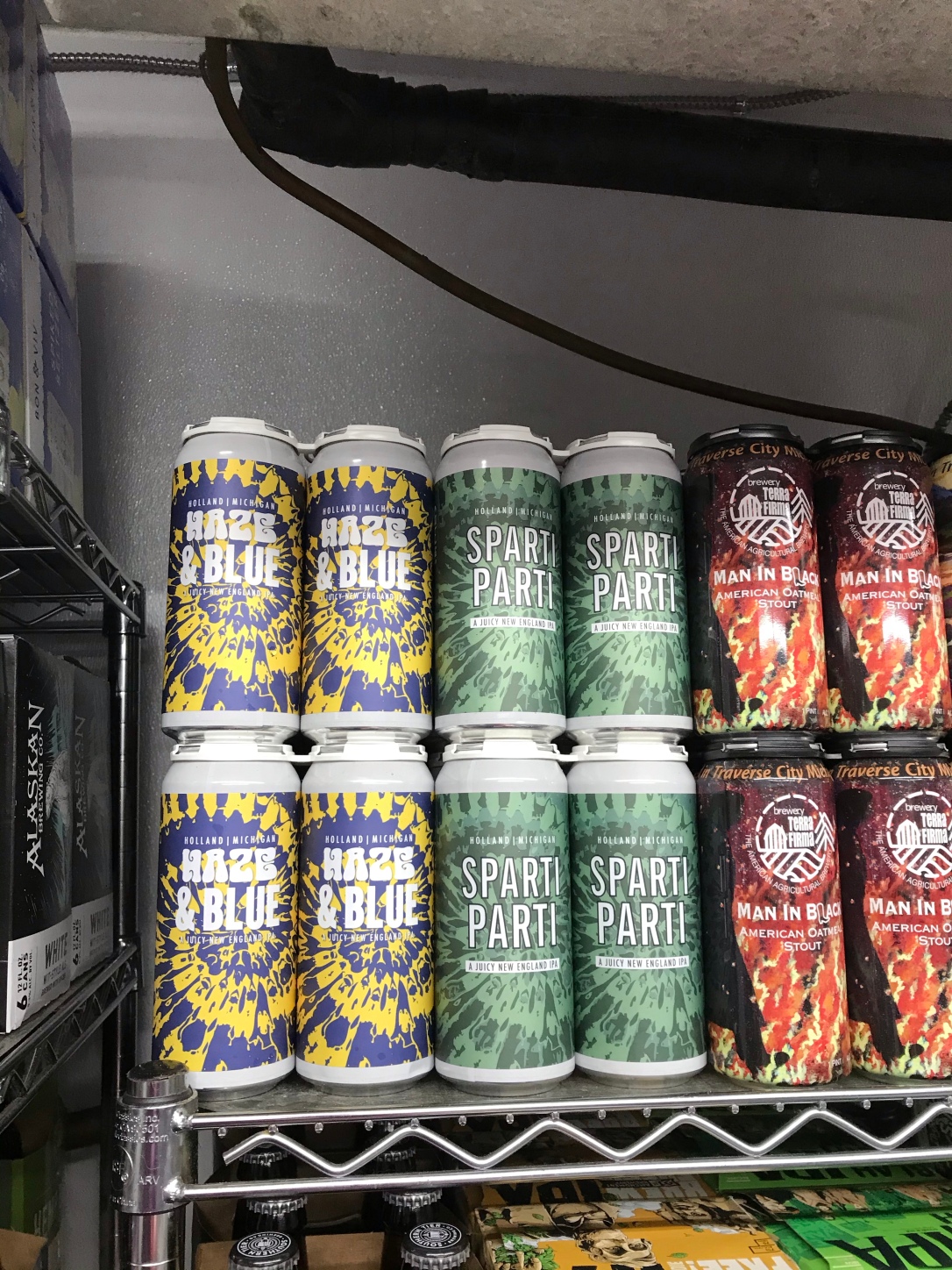 My husband brought home some of the Haze & Blue for me. ❤️💛💙 I will crack one at game time I think.

Writing may end up getting out off until tomorrow. But I may still be able to squeak in a few words before he gets up and the game starts. He wants to get me out of the house for a bit today so once he gets up there will be no point in trying.

This morning dawn beautiful so I am hoping that means the sun will stay out all day (or atleast most of it). Here’s to all of us having a great day! Cheers! 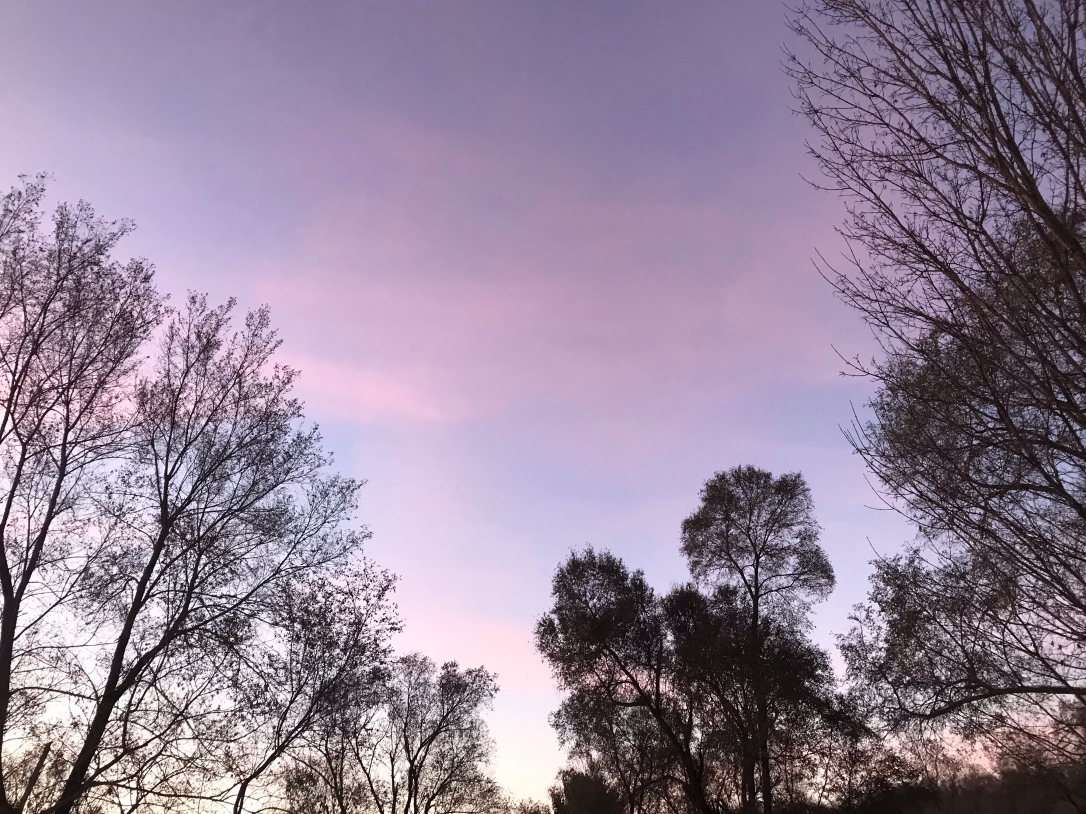