So much is going through my head…  August is officially gone.  September and Fall are here.  It has been a year ago today that I started my journey after 15 years of retail work.  My eldest son’s birthday is today as well.  He turns 28 years old.  I am struggling to keep moving forward.  Even though I push myself my everything seems to resist it.  Time is spirally away faster and faster.

Last night I went to the Leatherneck MC event to cover it for the paper.  I almost walked out.  But I pitched the idea to the paper and they accepted.  If I did not deliver what would be on the front page at this late date?  So I plunged ahead.

I was so out of place it wasn’t funny.  For starters I ride a sportbike and prefer it that way.  Lately many of the Harley riders I have encountered  have given me grief over my ride.  It used to be a more friendly atmosphere when riding.  Mentally I was very conscious of this.  Everyone also knew everyone else.  It was like being someone’s date at a family function where you know no one then your date disappears and you are on your own.  But I had paid $10 to get in so I atleast had to stay for the free food.

A few people chatted with me as I stood texting like crazy on my phone as my various family members tried to keep me sane and there.  I was obviously out of place.  I could feel a panic attack pushing toward me but I had to try to do something for a story.  I called a friend in desperation asking him if he wanted to come to the event.  I said I’d pay for him (my last $10) and there was free food.  He could ride or drive.  He said yes.  I breathed a sigh of relief.  But who knows when he was going to show up.  What was I supposed to do til then?

I tried walking around but felt even more self conscious as everyone kept looking at me trying to figure out what I was doing.  So back to stand by the bar I went.  Sadly I was broke so not even a can of beer passed my lips.  And I really really wanted one.

Eventually the food was ready and people started lining up.  I still hung by the bar in hopes that my friend would arrive soon.  No joy.  So I texted him to let me know when he got there and got in line.  I ended up chatting with a bunch of people as we waited.  One gal and I got talking about breast prosthetics (long story) and she was saying that she lost her natural breasts to cancer over 15 years ago.  This led to a funny story about my Grams who also had breast cancer.  After quite a few laughs we were at the food.

Once our plated were filled we went our separate ways.  As I found a stump to use as a table I heard my name and turned to see another friend who had stopped by to get some grub.  So he and I sat and talked over our piled high plates of delicious food.

Not long after I finished my plate I got a text from my friend saying he arrived.  I saw him pull in on his Harley moments later.  Laughing (sort of) I excused myself to go kick my new arrival’s butt for texting while he was riding (supposedly he stopped the bike before he did it).  Well I introduced both of my friends and went to get more food.

Soon we were deep in conversation catching up on each others lives.  Before we knew it the band was warming up and the music started.  Bonfires had been lit as the night was getting chilly even with the sun still up.  The band was awesome (I can honestly say that I enjoyed everything they played).  We took turns guessing the different songs and bands as their first set jammed.

Part of the way through they asked the band to stop for the traditional log lighting.  They carve out a big log and then light it from the inside.  It is actually pretty damn cool.

After that the party kicked off in earnest.  It was all about being with family (for those of you who don’t know the Leathernecks are a motorcycle group made up of Marines so everyone there is considered family) and having a good time.  So my friend and I watched through the first set (I pretty much sang and headbanged through most of it) then chatted with the band.  By this time dark had fallen and everyone was hanging around the bar and bonfires.  We mad it through part of their second set before we left.  My friend didn’t want to leave me on my own so he gently nudged me toward my car.  I took the hint and headed home.

All in all I’m glad I stayed.  Now I just need to sit down at one point to day and get the article written.  Thanks for reading!

me and my rescuer 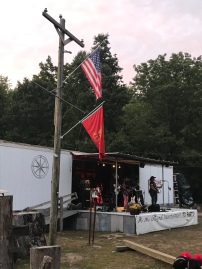 the American flag followed by the Marine Corps flag 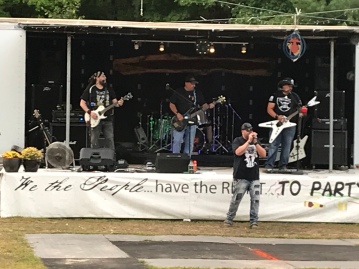