Gah!  I got sucked in reading another blog, Roxy Travels.  She’s on a road trip with her Honda Fireblade going through Europe.  I am envious, as I sit here and watch the snow fall.  And I need to get back in the saddle again.  I am so afraid of messing the new bike up some how I am completely inept to ride of care for him.  I feel like I’m going to drop him if I try to move him by pushing him.  Or I am extra careful riding because if something happens I can’t afford to get him fixed.  Things like that.  It is very frustrating because I love my bike.

My other bike, the Black Pearl or Pearl for short, I had no problems with.  I rode her hard and moved her on my own… and she weighs a lot more than Rogue.  But with her I was comfortable.  She’s dinged up and I’m not worried about that.  I’m focused on riding.  I throw a leg over Rogue and I start worrying about everything (including riding).  It defeats the purpose.

I still have the Pearl but I need to replace one of her engine cases as a hole was worn through it when I had to lay her down when some idiot pulled out in front of me.  I want to fix her up and use her for track days eventually.  But if I can’t get through a full season with Rogue there is no point.  I need the practice and to believe in myself.

This situation has been really really hard for me this past riding season.  As much as I wanted to ride I found myself making up excuses because I was scared to ride.  Friends would want to take our bikes out for the day and I was petrified.  I was scared I’d ride too far over my head.

I need to get past my ego as well.  I am one of a rare breed of female rider up here in the Great White North…. I ride a sportbike.  There might be a handful of other females who ride a sportbike.  But I think less than 10 in the area.  If that.  So all the guys think it’s cool that a female rides but a sportbike?  That is something awesome to be treasured!  So I’m a bit of a novelty.  I admit that I revel in the attention but it comes at a cost inside.

I started up Rogue the other day in the hopes of getting a ride in once the ice melted more on the driveway (our driveway is dirt so you can find a clear path sometimes). But we got rain and then it turned to snow and we ended up with more ice.  Roads were clear up til then too.  We had a warm patch that melted most of the snow.  Would I have actually gone?  I don’t know.  I think so.  I have a tendency to push myself and do things when no one else would.  Besides I have heated gear to wear.  Regardless if felt sooooo good to hear Rogue purr at me again!  I had happy tears.

So this next riding season I need to get on it, literally, and go.  The hardest thing will be the anxiety and not being able to sleep as well as the panic attacks.  I get myself worked up over what could happen.  Yes I am prepared but I get stuck in the negative.

I have so many good memories riding too.  Either by myself of with my husband.  I’ve only been on my own bike for a few years and there is much more for me to learn.  I need to start from the inside.  I can do this.  Once I get going I have fun.  It’s the stopping and being around other people.  I just want to keep going.

The best thing for me with the garage is that all three bikes (my two and my husband’s one) will not only fit in the garage but they will have their own entrance as well as a nice big cement pad that runs the length of the garage to park on under a good metal awning.  THAT is my favorite thing!

Wow!  This has been a long one.  Thanks for reading!  Cheers! 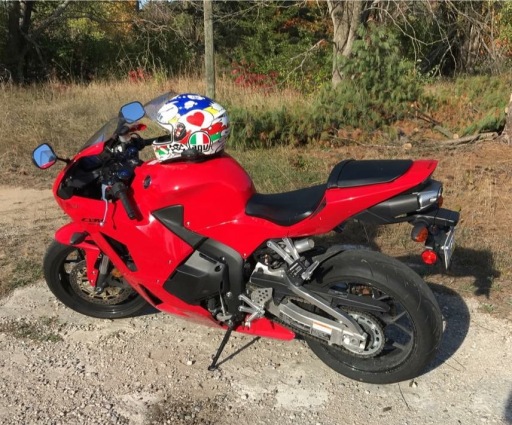