Another empty screen looks back at me this morning.  The kids let me stay in bed til around 9am despite the guys being here at 7am.  The husband is hitting the bad part of being sick so I am trying to keep the meds going for both of us.  He has been a love taking care of me.  It has been a rough weekend here.  I have phone calls to make but my voice sounds like Teutonic plates shifting rather than a human voice so I’m not sure how I will do.  When I try to communicate face to face I usually have to repeat myself.

That’s the interesting thing about writing.  When you are reading you never know how the writer is actually feeling.  I mean we can say one thing but feel the complete opposite.  You, the reader, are literally taking our word for it.  When the writer is sick you don’t hear the coughing and sneezing as they write.  If the writer is in pain you don’t feel the migraine or the muscles flaming up as they try to type before it gets too bad.  We know none of that.

The flip side is sadly true too.  The writer will claim to have all this wrong and be happily typing along, sipping coffee looking up how a person with Cushings disease is supposed to feel.  You just don’t know.  You are putting blind faith in your writer that they aren’t lying to you.

I don’t know.  Maybe I’m just getting too cynical as I get older.  People find out that they can abuse people’s sympathies and do so.  I’ll get frustrated with people when they meet Stella.  Her hips will pop out if she moves a certain way or does too much.  Both her knees are nobs the size of small tennis balls when she lays on her back and you can actually see the damage.  But when you meet her you would never know there is anything wrong.  She is shaped wrong, her back end is way too small compared to her big and beefy shoulders and chest (that is from over compensating for her back end not working; she was abused but I haven’t been able to get specifics we can only guess).  But she is all bouncy and wants to play and chase her ball.  She is barely a year old so she is still in puppy mode and will ignore pain as much as she can.

So when people meet her or see pictures of her playing they think that I am lying when I ask for help with her medical stuff.  I set up  GoFundMe page for her not long after I found her on the road because her hips are bad and both knees will need to be replaced.  It is $2000-2500 a knee.  I started all the dogs on hip and joint medicine (the strongest I could find) and Stella also gets hemp oil.  This steady regiment seems to have helped a lot.  She is busier than ever.  But it has not fixed the problem.  The problem is hidden to the naked eye unless she manages to pop one of her hips out while she is playing.  And because of that people assume I am lying.  Nevermind that medication is $200 a month.  This doesn’t include any vet visits or food for four dogs. 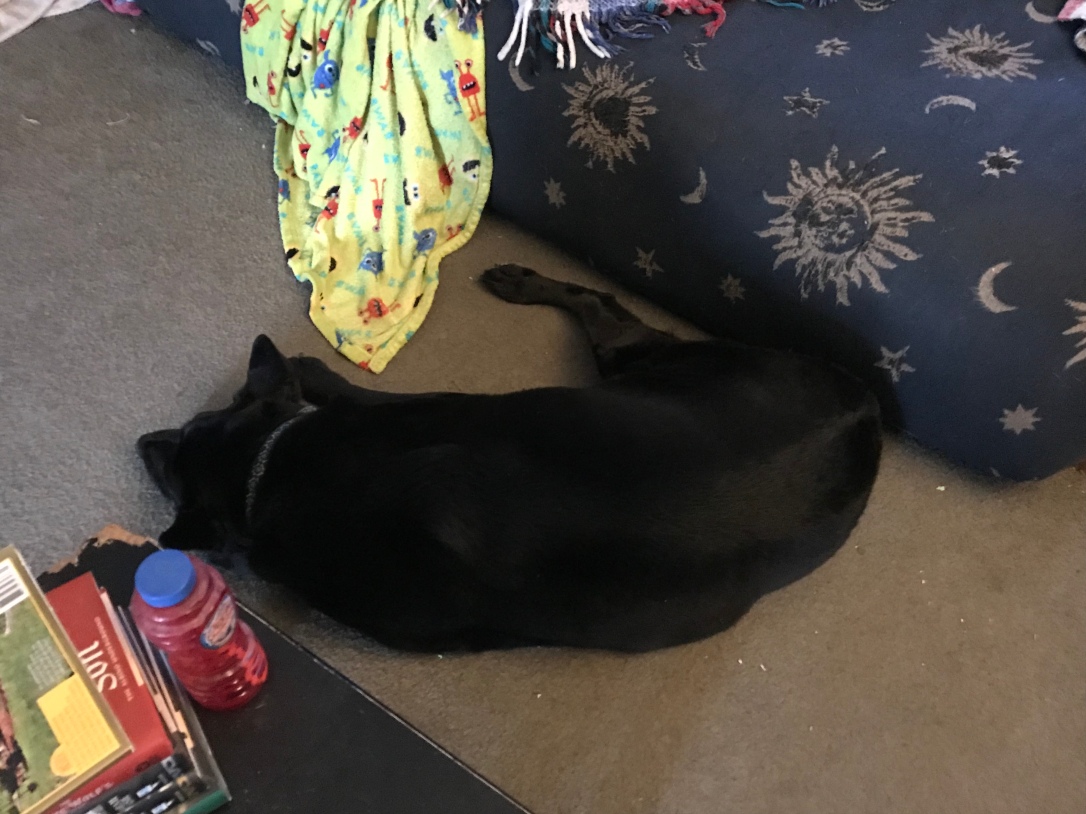