Groggily and happily I look back on last night.  I was so pumped that I didn’t go to bed until almost 4am.  But here I am at my usual time in the morning doing this.  So pardon me if I wander.

Last night was AMAZING!  I wasn’t sure how well it would go because a lot of the day leading up til then was sketchy at best.  The youngest somehow got into Chris’s trash and chewed up some empty (thank goodness) vape juice bottles and I didn’t find those until I was getting ready to leave.  I’d planned on leaving early to do some running but once I found the empty chewed containers I was calling and messaging like a mad woman.  Once I figured she was ok I headed out the door.  I had to atleast stop and get their medicine before meeting up with Mom.  When does the store close?  5:30pm.  I have time.  I’m heading in the opposite direction of traffic.  Until I hit all the construction I did not know about.  I pulled into an adjacent parking lot at six minutes til close and going running in.  Oh look!  The sign says they close at 6pm.  Sigh.  Grab the medicine and head out the door.   I fly down the back way to downtown.  Straight into more construction.  For the love!  Thank goodness for my hands free calling on my Jeep.  I call Mom.  It’s getting close to 6pm and I’m not sure if I’m meeting Mom at 6 or 7 or where since we decided to meet downtown instead of at her place.  6pm is when.   Ok.  Horizon Books is where.  Longish story short after a few phone calls to loved ones over family matters and walking into the book store with my own hardback copy of NOS4A2 and feeling VERY awkward we finally managed to  hook up.  We get to the Opera House and get our seats.  The lights dim.  Let the magic begin!

Joe Hill was begin “interviewed” by fellow author Loren D. Estleman.   The presenters  tells us that one of Joe’s conditions for doing this was if they could get his idol Loren to do the interview.  Since Loren is a Michigan native and friends with some of the members of Michigan Writers they cinch the deal.  Joe arrives on stage wheeling a smallish suitcase.  He smiles at us and says, “We’ll get to the suitcase.”

He reads us a few pages from his new collection of short novels “Strange Weather”.  I always enjoy listening to an author read his or her own work.  It’s how it sounded in their head.  The closest you’ll ever be to what is going on in there.

He finishes to a round of applause.  As he walks over to his seat across the stage he explains that he has been in awe of Loren for many many years and since he can finally meet his idol (he sits down and unzips the small suitcase with a flourish) for every question he asks Joe he will have to sign one of his books.  The suitcase contains all of Loren’s books.  Well not quite all of them.  Loren is about as prolific as Joe’s father, Stephen King.  And with that, friends, let the fun begin!

The writer’s had talked over dinner before so this felt very much like a continuation of the conversation.   Like you are a little kids listening to the stories at the adult table at the family gathering.  Loren doesn’t ask questions so much as direct the conversation so you are listening to two of the best writers out there talking about not just their craft but themselves.

I had never heard of Loren before last night.  Which I am sad that I hadn’t.  I grew up in Hazel Park, Michigan which is just outside of Detroit.  Loren was born and raised in Ann Arbor (and I hear the Michigan Fight Song going thru my head… Go Blue!).  I was surprised when I listened to him talk about his past and his writing that we had similar histories.  Most of the places he referenced where in my childhood and the detective series he writes (one of them) is based in Detroit.  So I found myself very much interested in what he had to say.

Listening to them talk to one another (and us) was amazing.  The topics covered besides writing was gun control, death, life, childhood, abuse, divorce….  we learned as much about them as we did their writing.  It was a pleasure to listen to them both.  The stories they shared brought laughter as well as applause.

The talk lasted longer than it was supposed to (I don’t think anyone minded) but they opened up the floor for questions.  Most of the questions were thanks and praise for the authors.  When that was done we filed out of the auditorium and promptly filed back in to get our books signed.  Mom (who had much more fun than she thought she would… horror is not her reading material) boogied home at this point.  I waited quietly in line for my turn.

Both authors were seated at the table and just about all the attention was on Joe Hill.  Loren sat and chatted with a few people as he sat beside him.  As I waited in line I came to a decision.  I would have both authors sign my copy of NOS4A2.  After all it was that book that I discovered Joe Hill and thru him I discovered Loren D. Estleman tonight.  So I did.  And both authors were tickled.  Joe even drew a doodle of Charlie Manx (the baddie in the book) in there!  Joe insisted that Loren sign on the Naughty List in the fly leaf.   Then I asked if I could have a picture with them both.

It was a night to remember for a very long time.  (As an added bonus I can brag that I parallel parked in four moves.)  I purchased a few more books and had them signed but NOS4A2 is something I will lug around with me for a while.  I keep opening the book to see the autographs and doodle, just to make sure.   I can’t recommend their works enough! 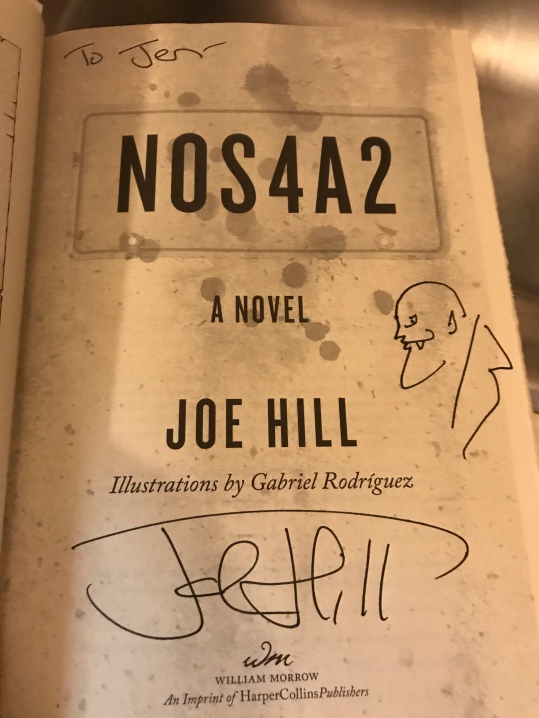